THE AIKEN TRAINING TRACK ANNOUNCES THAT THE USAGE FEE FOR THE TRACK WILL BE SLASHED BY 50% FOR TRAINERS, AS COVID-19 HITS THE THOROUGHBRED RACING INDUSTRY ACROSS THE COUNTRY

Aiken, S.C. – The Executive Committee of the Aiken Training Track worked quickly on Monday afternoon, March 30, 2020, to cut in half the track’s usage fee for horses training on the mile and/or 5/8 mile track offered at the historic grounds. The monthly track usage fee of $200.00 per horse has been dropped to $100.00 per horse, at least through the month of April 2020.

“We want to help our loyal trainers at this time of economic uncertainty. We plan to watch over our monthly track usage fee with an eye to assisting our hard-working trainers as they try very hard to withstand the numerous changes in the racing business caused by this Coronavirus pandemic. Racing meets have been cancelled, important thoroughbred sales have been cancelled, even restrictions on where horses can ship have emerged, “said Bill Gutfarb, President of the Aiken Training Track and a member of the Executive Committee. “Owners, trainers and staff have been seriously impacted. We are trying to help them,” he continued.

At a track board meeting on Thursday, March 26, 2020, the purchase of a new John Deere 5100E Utility Tractor was approved, along with a new loader and fixed pallet fork. Jim Rhodes, head of the track’s maintenance program, spearheaded the tractor purchase and will make certain the new equipment is well used in perfecting the track’s outstanding surface.

The 78th running of the Aiken Trials was held on Saturday, March 14, 2020. Five pony races and five trials were successfully run. Excellent examples of young horses on their way to becoming winners, as well as older horses took to the track with zest. Fans enjoyed the horse racing. During the Trials a famous gentleman from Canada and a long-time friend and owner who brought horses to train at the Aiken Training Track, Gus Schickedanz, was honored. The late Mr. Schickedanz became the 3rd inductee into the track’s Ambassador’s Club. He is remembered for his dedication to the sport of horse racing and to the Aiken Training Track in particular.

Ride the Rail at the Aiken Training Track on February 23

photo courtesy of the Aiken Standard

Have you ever wanted to ride on the Training Track where racing immortals like Kelso, Swale, Pleasant Colony, Tom Fool, Gallorette, Shuvee, and others trained?

Space is limited, and advanced registration is requested. Please visit this page for more information about the track’s Ride the Rail event.

The Aiken Training Track announces an outstanding year in 2019.

William Gutfarb, newly elected president of the track’s Board of Directors and Chair of the Finance Committee, tallied the graduates’ year-end results shortly after the November-December 2019 results were posted on the track’s web site. 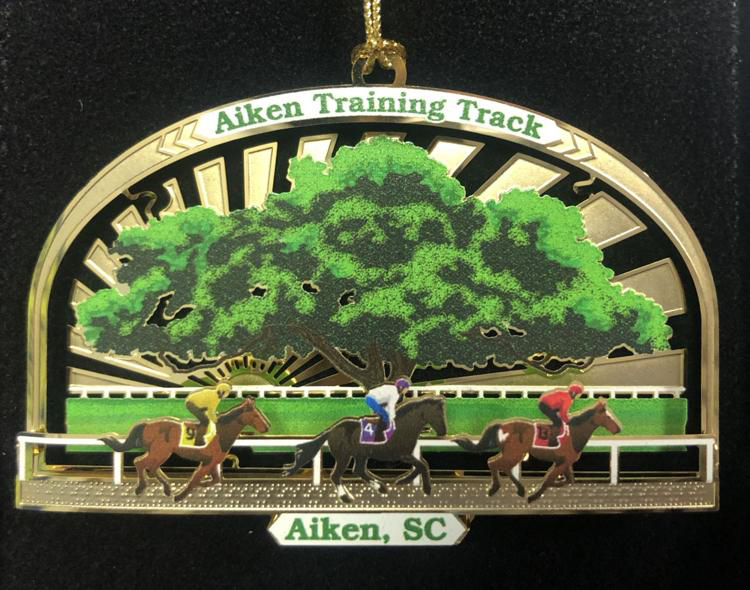 The Aiken Training Track is honored to be the winner of 2019 Aiken Commemorative Ornament contest. The Aiken Downtown Development Association (ADDA) has run this contest for 24 years, and voting this year began in August. Other ideas for the commemorative ornament included the Old Aiken Hospital and Palmetto Golf Club.

For a complete list of Aiken commemorative ornaments, visit DowntownAiken.com. This information appeared in the Aiken Standard on November 13, 2019 and is available here.

” This painting depicts the Aiken Trials, which began in 1942 at the newly built Aiken Training Track. Devereux Milburn, F. S. von Stade, and William B. Wood obtained a charter for the training track in 1941. Modeled after Keeneland’s track in Lexington, Kentucky, it was completed and opened in November of that year and not long after saw success with Shut Out, who trained there, winning the 1942 Kentucky Derby. …”

This painting, featuring the 1942 Aiken Trials, will come up for auction.

” This painting depicts the Aiken Trials, which began in 1942 at the newly built Aiken Training Track. Devereux Milburn, F. S. von Stade, and William B. Wood obtained a charter for the training track in 1941. Modeled after Keeneland’s track in Lexington, Kentucky, it was completed and opened in November of that year and not long after saw success with Shut Out, who trained there, winning the 1942 Kentucky Derby. …”

William B. Gutfarb steps up as Aiken Training Track President 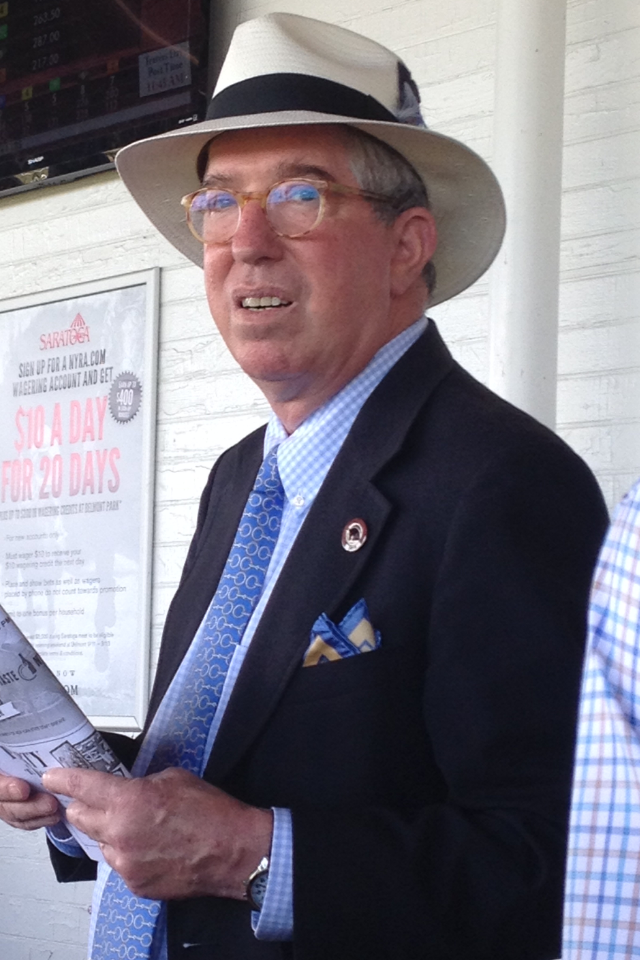 Bill Gutfarb and his wife Wendy have maintained a house in Aiken since 2009 as seasonal residents, becoming full time residents in 2014 with the purchase of their home in the Horse District.  He formally retired in 2016 after ten years with the Boston Red Sox and thirty four with Boston Trust Management Corporation. Retiring as Executive VP and Treasurer with responsibility for the business affairs of the late Jean Yawkey, her trust and estate, the Yawkey Foundations, her controlling interest in the Boston Red Sox, and the 25,000-acre Tom Yawkey Wildlife Center in Georgetown, SC.  Over the years Bill has served as a trustee of a number of New England independent schools and charitable organizations.  He was a charter member of the board of Boston’s Emerald Necklace Conservancy. He also served for many years as a trustee and Clerk of the Corporation of the Dedham (MA) Institution for Savings, a $1.5 billion Mutual Savings Bank. Bill is a graduate of Boston University and holds an MBA from Babson College. Bill remains active as a Trustee of the Yawkey Foundations and is a Trustee of Eaglebrook School in Deerfield, MA.

Bill and Wendy are active in Aiken’s equestrian community, and Wendy serves as Joint Master of the Aiken Hounds.  Interests include ownership of thoroughbred racehorses, sporting art, and non-fiction reading.  He’s been active over the years in the sports of ice hockey, golf, skiing, riding and fox-hunting.  Bill is a member of the Green Boundary Club, the Saratoga Reading Rooms and the Aiken Tennis Club.  Bill has two adult children married and living in Massachusetts. 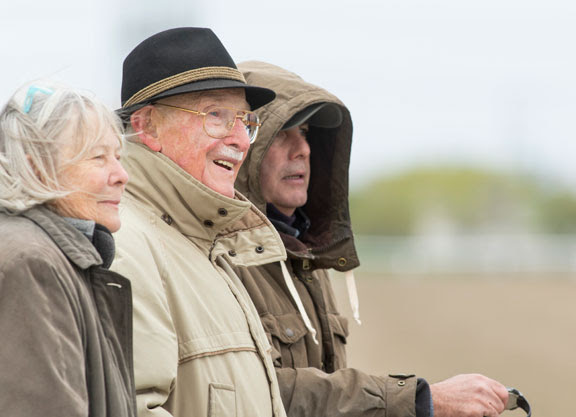 For Ashbrook Farm and BBN Racing’s Concrete Rose, 2019 is a year for the books.

Already a three-time graded stakes winner when she walked onto the Belmont Park turf for the first time July 6, the daughter of Twirling Candy picked up her first grade 1 score in the $750,000 Belmont Oaks Invitational Stakes (G1T).

“I feel like a champagne bottle that has been shaken up and not opened,” Bo Bromagen of Ashbrook told a representative of Fasig-Tipton, which sold the Twirling Candy  filly as a 2-year-old. “This is beyond my expectations, but you dream for it.”

It was Jodie, the Japanese invader making her first start stateside for owner Tadakazu Obama, who took the lead from the break in the 1 1/4-mile test. Opening a one-length advantage under jockey Miyabi Muto, the Daiwa Major filly set fractions of :24.29, :49.16, and 1:14.14 through six furlongs.

Concrete Rose and regular rider Julien Leparoux stalked in second just off the rail, followed by Chad Brown-trained Breeders’ Cup Juvenile Fillies Turf (G1T) victress Newspaperofrecord, who broke rankly from the inside. The filly tipped out into the two path as Irad Ortiz Jr. worked to get a firm hold. The move forced Cafe Americano out eight wide, causing Coral Beach and Just Wonderful to check in the backstretch.

As the field of nine entered the far turn, Newspaperofrecord tucked back in toward the rail and was given a bit more rein. She moved up to three wide on the outside and tried to challenge the leaders briefly before dropping back, her energy depleted.

Settling down for a drive at the top of the stretch, Concrete Rose took command a furlong from the wire, kicked home, and crossed the finish 2 3/4 lengths in front in 1:59.97.

“I thought Chad’s horse (Newspaperofrecord) would be on the lead unless they came for her, but I guess today they tried something new and took her back a little bit,” said Leparoux. “The Japanese horse wanted to go, so I was happy to be second, and my filly relaxed beautiful for me the whole race. I knew at the quarter pole I had a lot left. She made a big run at the end. It was nice.

“She’s pretty easy to rate. She seemed nervous in the paddock, but when she’s on the track, she’s just very easy to ride. I knew she was going to relax, and I wasn’t really that concerned (about the distance).”

Just Wonderful, who lunged at the start and made contact with the gate, raced near the back of the pack through the first mile. Coaxed by jockey Wayne Lordan at the quarter pole, the filly was angled out six wide in upper stretch and rallied late to take place honors in a photo finish.

“She likes to drop in at the races at home, so we decided to do the exact same thing here,” said Lordan. “I thought she came home really well. It’s her first time going that trip as well, and for the future she’ll get that trip. Hopefully, she can come back out here and compete again. I’m delighted with the run.”

“(Newspaperofrecord) didn’t want to rate at all. She was all over the place,” said Brown. “It was no fault of Irad’s. The filly just wouldn’t cooperate. So we tried it, it didn’t work, and that’s that.”

“Sometimes your plan works, and sometimes it doesn’t work, but this one worked,” said trainer George “Rusty” Arnold, who admitted he was worried coming into the Belmont Oaks that he had rested the filly too much for her to maintain top form.

“Everyone had run, and we hadn’t run in two months and a couple of days, and I was a little worried. Her training went smooth, her works went smooth, and everything went well. I was impressed today. I was very, very happy with how she ran.”

It was the fourth graded stakes score for Concrete Rose, who took the JPMorgan Chase Jessamine Stakes (G2T) at 2 before finishing off the board next out in the Juvenile Fillies Turf. Freshened for her sophomore campaign, she made her 2019 debut March 9 in the Florida Oaks (G3T) at Tampa Bay Downs and followed that score with another impressive win in the May 3 Edgewood Stakes Presented by Forcht Bank (G3T) at Churchill Downs.

Arnold said the filly will likely continue with the New York Racing Association’s Turf Tiara series and make her next start in the inaugural $750,000 Saratoga Oaks Aug. 2 at Saratoga Race Course.

“Absolutely, unless there’s an issue,” said Arnold. “That’s why we rested her, and hopefully it worked.”

Sent through the ring as a 2-year-old at the Fasig-Tipton Midlantic 2-Year-Olds in Training Sale, Concrete Rose caught the eye of Bromagen when she was galloping out from her breeze during the under tack show.

“She was at the Fasig-Tipton Maryland sale, and they always have good horses that come out of there,” said Bromagen. “I was sitting up in an elevated position just past the wire, and she settled into this rhythm once she made her breeze, and I think I was one of the only ones that saw it.”

Bloodstock agent David Ingordo signed the ticket for the filly, purchasing her on a final bid of $61,000 from the consignment of White Pine Thoroughbreds.

Bred in Kentucky by Ron Patterson, Concrete Rose is the third and final foal out of the Powerscourt mare Solerina. She has won five of her six starts and earned $818,650.

The Aiken Training Track was dominant at Belmont today with two of its graduates G1 winners: HENLEY’S JOY (Kitten’s Joy) in the G1 Belmont Derby and CONCRETE ROSE (Twirling Candy) in the Belmont Oaks. To add to the mix, KILLYBEG’S CAPTAIN (Mizzen Mast) ran 3rd in the John A. Nerud Stakes G2 on the same card. All three were  trained under the aegis of Cary Frommer.

Added together, they have won over 2 million dollars!