Canada is known for maple syrup, ice hockey, Niagara Falls, poutine and the beauty of its lakes, rivers and mountains.

It also is the home of Mike Keogh, who spends every winter in Aiken training thoroughbred racehorses in a stable that is based at Woodbine racetrack in Ontario for the rest of the year.

“I love Aiken,” Keogh said. “It’s a beautiful town, and the people are so friendly. I also love how quiet it is at the Aiken Training Track. There are all these dirt roads around it that seem to be built just for horses.”

Keogh, 61, has saddled back-to-back winners – Woodbridge and Enoree – in the Aiken Trials’ featured race, the City of Aiken Trophy.

In 2016, Enoree triumphed while setting a track record of 51 4/5 seconds for the distance.

Say No More, also trained by Keogh, had established the previous mark of 52 2/5 seconds while rolling to victory in the 2013 City of Aiken.

A native of England, Keogh immigrated to Canada in 1977. He sent out his first winner as a trainer in August 1993.

Gustav Schickedanz, who is a member of the Canadian Horse Racing Hall of Fame, has bred and owned the vast majority of the thoroughbreds trained by Keogh during his career.

“I was training privately for Gus when he had a stroke just before 2003,” Keogh said. “He decided I should go out on my own and go public because he was going to scale back. But around that time, we came up with two of our top horses, Wando and Mobil, and that seemed to rejuvenate his health.”

It also renewed Schickedanz’s enthusiasm for racing, and he remained a big supporter of Keogh.

But for Keogh, the thoroughbred that stands out the most among his past trainees is Langfuhr.

That horse was Canada’s champion sprinter in 1996. Langfuhr also ran in this country, winning three grade I races.

“He is the best horse that I’ve ever had,” Keogh said.

Three sons of Langfuhr – Wandofuhr, Viewfinder and Wedgewood – are Keogh’s top candidates for this year’s Queen’s Plate, which is Canada’s version of the Kentucky Derby.

“My biggest dream would be to go back to England and win the Epsom Derby,” Keogh said. “But I don’t see that happening because it’s around a mile and a half, and Gus doesn’t really breed for distance.”

But if Schickedanz’s program did happen to produce a horse with the right sort of credentials in the future, “I know Gus would be all for running in the Epsom Derby,” Keogh said. “He would do it in a heartbeat. He is a wonderful man to train for. We have great relationship, and we trust each other.” 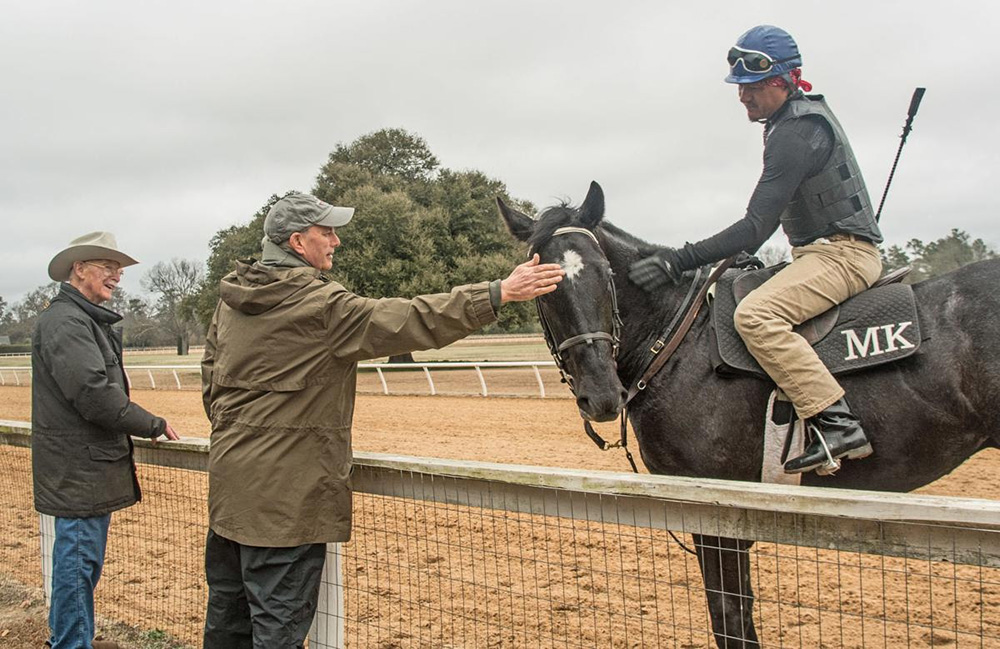