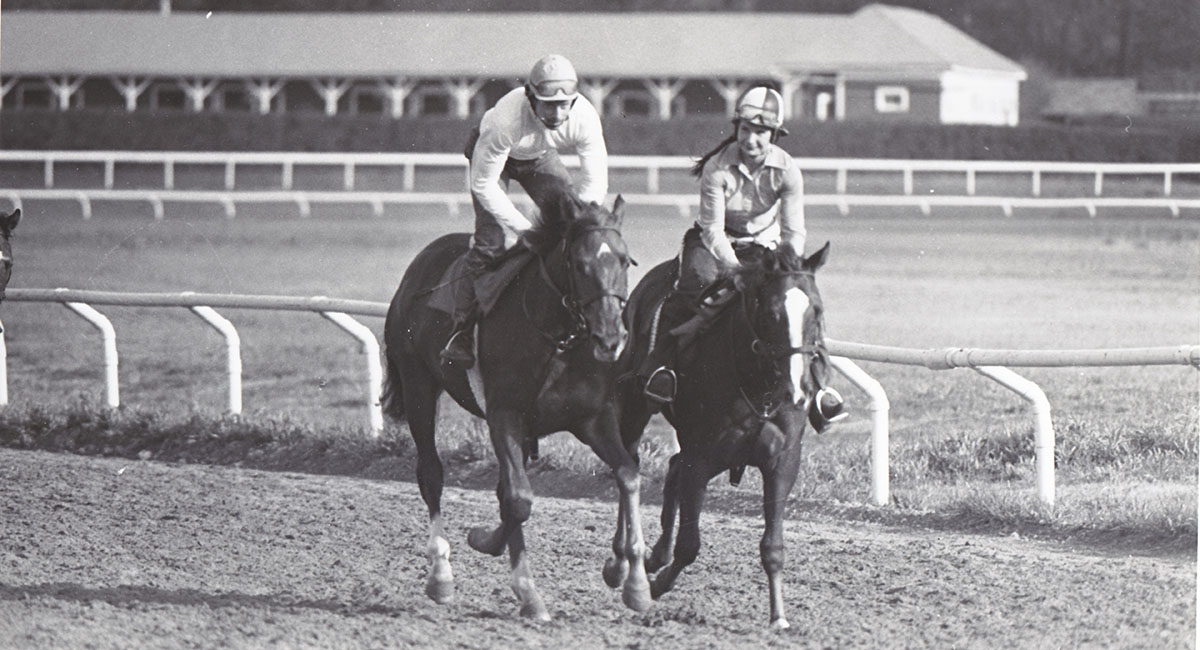 The track was modeled after the Keeneland Track of Lexington, Ky. The track was 1 mile in length; the chute was an eighth of a mile; “Horine turns” (flattened curves) were installed; the stretch was 70 feet wide; with 60-foot-wide turns and back side and a steeplechase course in the infield.  The track construction costs were $52,000, which in today’s dollars would have cost $862,889 according to Consumer Price Index Conversion Factors.

The track was completed and opened in November 1941 and immediately saw success with Shut Out winning the 1942 Kentucky Derby. Elkridge named as the 1942 Champion Steeplechase horse.

Since opening, the track has seen 40 alumni crowned as national champions, including Pleasant Colony, Swale, Forty Niner, Storm Song and Midshipman. They are pictured on our Champions page, in sequence by the year their title was earned. 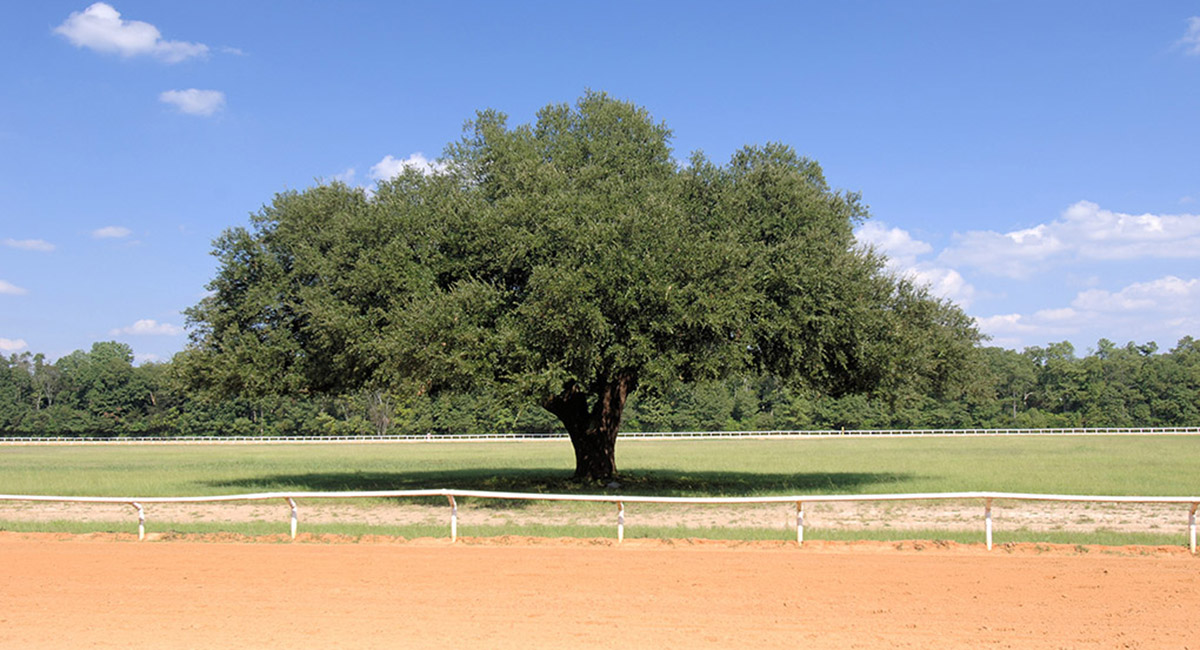 The Legend of Blue Peter’s Tree

Blue Peter was foaled at Claiborne Farm in Paris, Ky., on March 21, 1946. His sire, War Admiral, and grandsire, Man o’ War, are both members of the National Racing Hall of Fame. His dam was Carillon. Blue Peter was owned and bred by Joseph M. Roebling, (1907 – 1980), whose family built the Brooklyn Bridge. He was trained by Andy Schuttinger, (1882 – 1971), who had been a highly successful jockey with wins at Travers Stakes, Jockey Club Gold Cup and the Preakness Stakes. He rode Man o’ War to a win in the 1920 Midsummer Derby at the Saratoga Race Course.

Blue Peter returned to training in early 1949 and was considered one of the favorites for the 1949 Kentucky Derby. He trained the first three months in 1949 without issue, but a headline in the April 15, 1949, edition of the Aiken Standard and Review would shock the racing world: “Blue Peter Is Out Of Derby Race This Year.” The cause was given as an attack of appendicitis along with a fever of 103.5 degrees, which left him weak and unable to train. Schuttinger said that it was in the horse’s best interest to give him time to heal. Unfortunately, Blue Peter did not recover well enough to compete the rest of 1949.

The Aiken Standard and Review reported on the funeral in its January 18, 1950, edition. 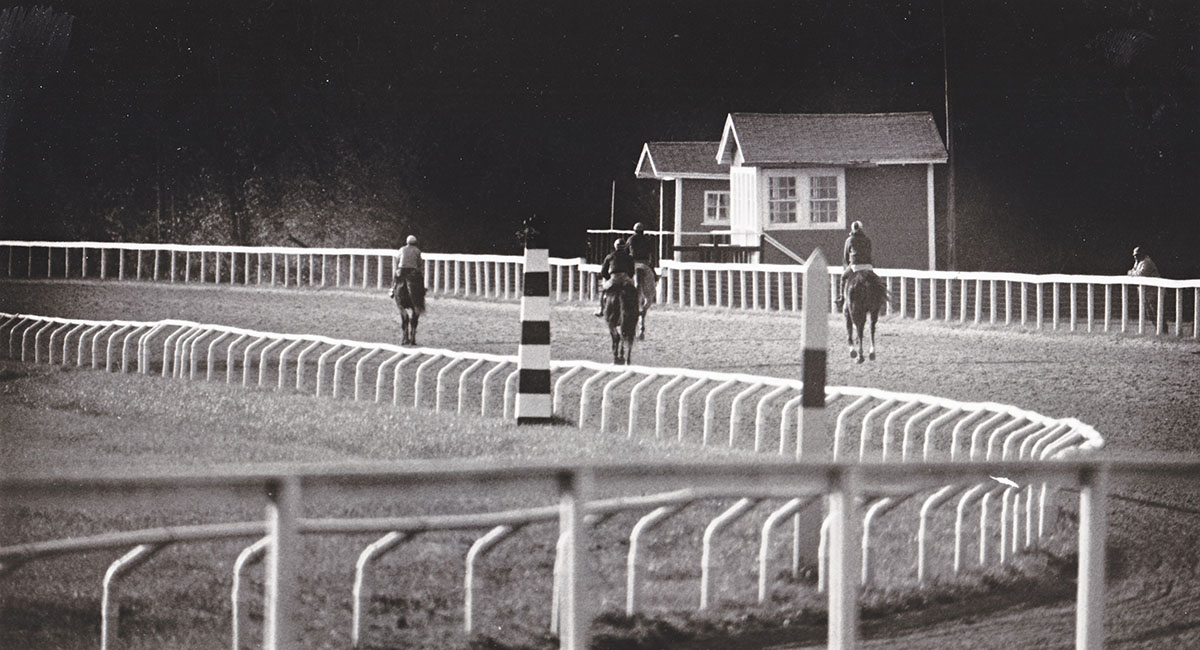 The Sports Center of the South

“A race horse who might have been one of the greatest yet was buried here last Friday. Blue Peter owned by Mr. Joseph M. Roebling died Thursday of an intestinal disorder. In the first ceremony of its kind to be held here Blue Peter, was laid to rest in the infield of the Training Track. His six-foot grave is under a large oak tree. Blue Peter was placed in a large pine coffin and his body was covered with a yellow and red blanket which was monogrammed with the owner’ initials J. M. R. The coffin was lowered into the grave by the means of ropes. Some 25 or 30 horse fanciers attended the funeral. As the horse was lowered into his grave many of the spectators wept. The grief was seen most in trainer Andy Schuttinger who considered Blue Peter the best horse that he had ever trained. It was Schuttinger who trained this horse who was almost unanimously declared the best two-year-old in 1948. Last winter he was the winter book favorite in the Kentucky Derby, but he became sick in April and did not run. He was rested from then until he started winter training and was doing pretty well until he look sick recently. His winnings as a two year old totaled $189,185. Blue Peter was bred in the bluegrass country of Kentucky. He was out of Carillion, a mare by Case and Man of War’s son, War Admiral. He started his racing career’ slowly. At Garden City in his first start he finished third in a mediocre filed. However soon after that he set a record for four and a half furlongs at the same park. Sending Blue Peter to Jamaica he finished third in the Youthful Stakes.

This was the last race that he ever lost. He never in his life finished out of the money. He won the William Penn and Garden stakes at the Garden City, N.J. track. He was then layed off for two and half months. He came back to win the Monmouth Park Sapling Stages. He won the Special and Hopeful stakes when the Saratoga track opened. The climax to his career came when he ran in the Belmont Futurity. He beat Olympia by half a length to set a new world record for event. This clinched his recognition as the nation’s top two year old. Thus ended the career of a racing horse that seemed destined to be one of the best horses of all times, but death cut short his career.”

The Live Oak tree that Blue Peter is buried under has become the logo for the Aiken Training Track.