Courtsy of the BloodHorse 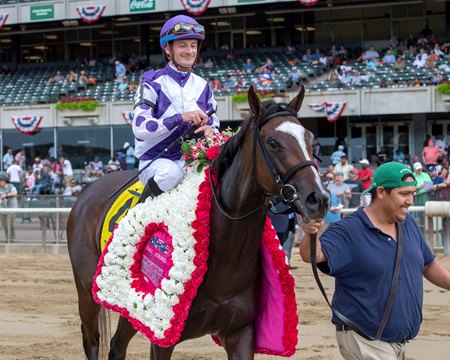 The Twirling Candy  filly is undefeated in three starts this season, picking up her most recent win by 2 3/4 lengths in the July 6 Belmont Oaks Invitational Stakes (G1T), which serves as the first of three legs in the Turf Tiara, part of the New York Racing Association’s new turf series for 3-year-old fillies.

The Saratoga Oaks will be run Friday at 1 3/16 miles on the Mellon Turf Course, a slight cutback from the Belmont Oaks’ 1 1/4 miles. The fillies finish up the turf series in the 1 3/8-mile Jockey Club Oaks Sept. 7 at Belmont Park.

“Right now, she is (the best 3-year-old turf filly in the country), but we’re halfway through the year and hope we continue on,” said trainer Rusty Arnold of Concrete Rose. “She won at 5 1/2 furlongs, a mile and a quarter, and in the middle, so it’s not an issue. I think the mile and three-sixteenths is well within her ability.”

Concrete Rose’s lone defeat in six starts came in the Breeders’ Cup Juvenile Fillies Turf (G1T) at Churchill Downs. Though Chad Brown-trained Newspaperofrecord was a runaway winner that day, Concrete Rose turned the tables on that rival in this year’s May 3 Edgewood Stakes Presented by Forcht Bank (G3T) at Churchill, then defeated her again in the Belmont Oaks, where Newspaperofrecord struggled.

Julien Leparoux, aboard for all of Concrete Rose’s 2019 starts, will ride again from post 5.

Newspaperofrecord will sit this one out, but Brown will be represented by Wonder Stables, Madaket Stables, Michael Dubb, Chris Mara, and Robert Masiello’s Olendon. The Belmont Oaks marked the first North American start for the French-bred Le Havre filly. She faded from fourth to eighth, beaten 10 1/4 lengths, but came off two strong performances at ParisLongchamp. She won the April 28 Prix Finlande with a determined drive before finishing second in the Saxon Warrior Coolmore Prix Saint Alary (G1).

Olendon will start from the rail with Irad Ortiz Jr. in the irons.

Trainer Aidan O’Brien will send out two fillies campaigned by owners associated with Coolmore in Kentucky-bred Happen and Coral Beach. They drew posts 2 and 3, respectively.

Wayne Lordan will make the trip to ride Happen, a daughter of War Front  making her U.S. debut. Happen was most recently sixth behind Watch Me in the Coronation Stakes (G1) at Royal Ascot, and she eked out a nose victory May 6 in the Coolmore Gleneagles Irish E.B.F. Athasi Stakes (G3) at the Curragh.

In the Belmont Oaks, Coral Beach was carried out by Newspaperofrecord and forced to check twice into the backstretch, finishing seventh. She returned to Ireland to run fifth in the July 21 Kilboy Estate Stakes (G2). A group 3 winner at 2, Coral Beach is the most experienced in the field with 18 starts. John Velazquez has the mount.

Bacon Barn and trainer Patrick Biancone’s Kelsey’s Cross is the lightest-raced competitor with only four starts since debuting in April. She enters off two third-place efforts in Belmont’s June 6 Wonder Again Stakes (G3T)—where she finished behind Brown’s Cambier Parc and Newspaperofrecord—and a three-quarter-length loss in the July 6 Martha Washington Stakes on the turf at Gulfstream Park.

“She shows up and she’s improving,” Biancone said. “We gave her plenty of time before we started to run her. Now she has great form.”

Florent Geroux will ride Kelsey’s Cross for the first time from post 4.

Rounding out the field from the outside is Albert Frassetto’s Her Royal Highness, who rallied to finish second in Monmouth Park’s June 30 Open Mind Stakes after she was bumped at the start. That effort followed a fourth-place finish in the May 25 Boiling Springs Stakes, where she was four wide and steadied late.

“She’s been a little unlucky. She had a little bit of trouble two starts back at Monmouth,” said trainer Graham Motion. “She probably should have hit the board in that race. She was running very well at the end last time. I think she handled the dirt, but she’s risen to another level on the grass.”

Her Royal Highness made her turf debut in the March 9 Florida Oaks (G3T) and finished seventh behind Concrete Rose, beaten only 2 1/4 lengths. Jockey Joel Rosario was aboard in the Florida Oaks and has the mount again Friday.