CONCRETE ROSE looks ahead to the next leg of Turf Tiara 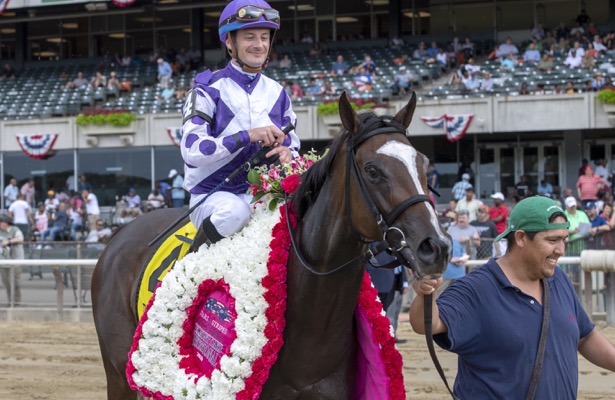 Concrete Rose emerged from her victory in Saturday’s Grade 1, $750,000 Belmont Oaks Invitational in good order according to trainer Rusty Arnold, who noted that Ashbrook Farm and BBN Racing’s daughter of Twirling Candy would be headed to the $750,000 Saratoga Oaks on Aug. 2 as long as she remains healthy.

The Saratoga Oaks is the second leg of the newly-minted Turf Tiara which includes the Belmont Oaks, Saratoga Oaks and the $750,000 Jockey Club Oaks on Sept. 7 at Belmont Park.

“She came back great,” Arnold said. “She was on a van with (Hall of Fame trainer) Shug’s (McGaughey) horses up to Saratoga at about 5 this morning, but everything looks great. As long as there aren’t any setbacks that’s where we’ll be headed.”

Concrete Rose, a winner of five of six lifetime starts, was a three-time graded stakes winner before notching her first Grade 1 triumph in the Belmont Oaks.

At 2, she won the Jessamine (G2) over the turf at Keeneland before scoring victories in the Florida Oaks (G3) at Tampa Bay Downs in her sophomore debut and the Edgewood (G3) at Churchill Downs.

Concrete Rose earned a 90 Beyer Speed Figure in the Belmont Oaks, replicating the figure earned in the Edgewood.

“Physically, she’s developed but her attitude has been her biggest change. Her self confidence is very noticeable,” Bromagen said. “It’s something you can’t miss. In the paddock she’s not acting up, she was just ready to go.”

Bromagen said that it felt great to be able to compete among some of the most sought-after Thoroughbred operations on the globe, like that of Ballydoyle, who raced two fillies in the Belmont Oaks, Just Wonderful and Coral Beach, as well as the Japanese pacesetter Jodie.

“The international support that has come to work this series is fantastic. I was sitting next to a table with the Japanese contingent and obviously Ballydoyle is up here as well,” Bromagen said. “It means a lot to finish in front of guys like that. They’re (Ballydoyle) like the New York Yankees of horse racing and it means a lot to be able to compete with them on that level and be successful at it.”