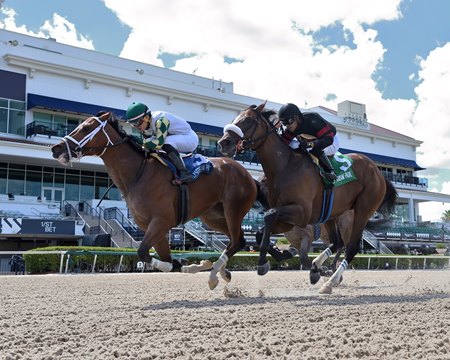 Double Crown  purchased privately by Reeves Thoroughbred Racing after a debut victory in September at Laurel Park, is running like money well spent.

Racing at Gulfstream Park May 16 in the $75,000 Roar Stakes, the 3-year-old Bourbon Courage  gelding picked up his first black-type victory in just his second start for his new connections. Taking command with a three-wide rally leaving the turn, he turned back a resolute favorite in Green Light Go to score by a half-length.

Compared to his previous race at Gulfstream April 26, when Double Crown was wide and forced to steady to avoid a loose horse, his trip was relatively smooth in the Roar. Fourth of six down the backstretch, he was always within striking range of early leader Cajun Casanova as 3-5 choice Green Light Go pressed two wide through splits of :22.39 and :45.19.

Pocketed in traffic behind the leading pair, with rivals inside and outside him down the backstretch, Double Crown found room exiting the turn and quickly engaged the leaders on the outside.

Then it was Green Light Go who found himself between horses, and when Double Crown lugged in slightly in early stretch as Cajun Casanova drifted out, Luis Saez on Green Light Go had to pause urging his mount for a few strides.

The horses straightened, and Double Crown was able to sustain a narrow advantage over Green Light Go, who gained renewed interest in the final furlong. The winner completed 6 1/2 furlongs on a fast track in 1:16.57, paying $7.60 as the second choice in the wagering.

A claim of foul by Saez against Double Crown and jockey Cristian Torres was disallowed by track stewards after a short review.

“When he passed the horse, he started to go in, but I corrected him right away and got him straight,” Torres said. “He finished strong.”

Torres, the leading apprentice during Gulfstream’s 2019-20 Championship Meet with 39 wins, rode without the customary five-pound weight allowance for apprentices, per rules for stakes races. He will ride as an apprentice for another two to three weeks, having received an extension due to COVID-19 circumstances, the jockey said.

It was the second stakes win for Torres and the second Roar victory for winning trainer Kathy Ritvo, who took the 2017 edition with Classic Rock for Reeves Thoroughbred Racing.

With Verve rallied to be third, a length behind runner-up Green Light Go. Ournationonparade, Cajun Casanova, and Ricki Ticki Taffi completed the order of finish.

The victory was the second in three starts for Double Crown, a Maryland-bred out of the Two Punch mare Two Columbus. The $46,035 winner’s share elevated Double Crown’s earnings to $83,865.

Bred by Dr. and Mrs. Thomas Bowman and Rebecca Davis, Double Crown is related to two other winners, including One Two Three Go (by Hunters Bay), a winner of three of 17 starts and $108,749. Double Crown began his career at Laurel, winning a maiden special weight race Sept. 8 for trainer Lacey Gaudet and owner Debbie Rhodes.

Dean and Patti Reeves are the principals in Reeves Thoroughbred Racing and teamed with Ritvo to win the 2013 Breeders’ Cup Classic (G1) at Santa Anita Park with Mucho Macho Man .

“He’s coming along and doing well,” Ritvo said of Double Crown. “We were just hoping he’d run to how he was training. He’s been doing so good.”