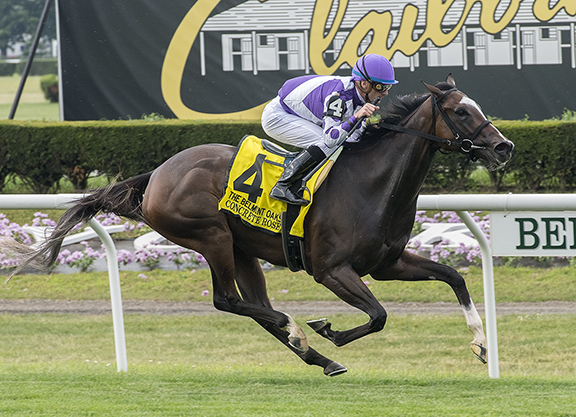 The brilliant GI Belmont Oaks Invitational S. heroine Concrete Rose (Twirling Candy), sidelined since suffering a hairline fracture in her right foreleg this summer, is nearing a return to the Rusty Arnold barn. Perfect in four attempts in 2019, the Ashbrook Farm and BBN Racing colorbearer was last seen posting an authoritative victory in the inaugural $750,000 Saratoga Oaks Invitational S. Aug. 2.

“She’s at Margaux Farm right now and she’ll ship back to Rusty by the first week of January,” Ashbrook Farm Racing Manager Bo Bromagen said. “She’s doing really well. She’s put on about 100 pounds and has maintained her muscle tone. Her coat looks great–she’s happy and healthy. She’s such a smart horse that really adjusts well to any situation.”

Bromagen added, “We’ve got one more check here next week by the vet–that’s a final go over from head to toe to make sure that everything’s got the green light.”

No surgery was required for Concrete Rose’s injury, just time off.

“It was such a light thing,” Bromagen said. “It took a couple of sets of X-rays to actually find it. Credit to Rusty for being so hands on and attentive. Even when the X-rays didn’t show anything up on the films, he knew something wasn’t quite right.”

The dark bay has crossed the wire first in six of her seven career starts, including last term’s GII JPMorgan Chase Jessamine S. and this year’s GIII Florida Oaks and GIII Edgewood S. The lone blemish on her loaded resume came over an extremely saturated surface when eighth in the GI Breeders’ Cup Juvenile Fillies Turf at Churchill Downs.

“As much as she did do on the track, I don’t think we found out exactly how good she could be,” Bromagen said. “It’s been an unbelievable ride.”